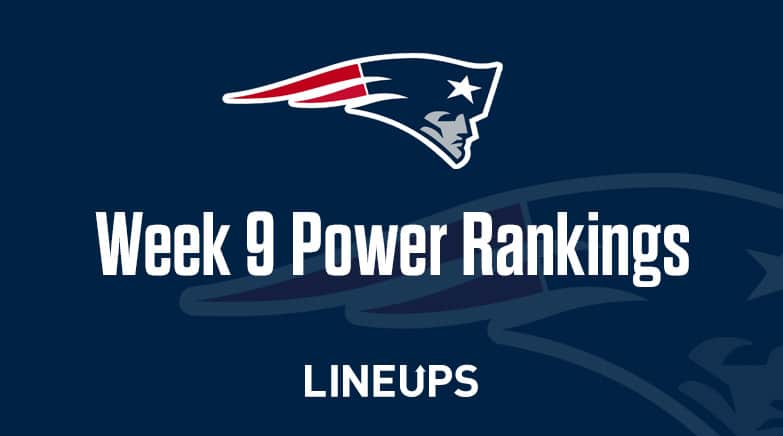 Week 9 of the 2019 NFL season starts today with a Thursday Night Football clash between the Niners and the Cardinals.

The Patriots are at the top of the rankings with eight straight victories, with the last one against the Browns by 27-13 on Week 8. Last week they were also first, and they didn’t allow anybody to take their spot at #1.

Next week / Ravens: New England visits Baltimore, a team they haven’t faced since 2016 when the Pats defeated the Ravens 30-23 at Foxborough. The last time the Patriots played in Baltimore, they got away with a 41-7 victory.

Get the best Patriots odds here at HRwager. Register now and start betting on the NFL.

The Saints are currently riding a 5-game winning streak, and they demolished the Cardinals 31-9 on Week 8, in Drew Brees’s return to action. Last week they were second, and are still there for Week 9.

Next week / BYE: The Saints are finally getting some deserved off time, getting ready for Week 10 when they host the Falcons at NOLA.

The 49ers completely demolished the Panthers on Week 8 by 51-13, and they are currently going through the best start for this franchise since 1990. Last week they were fourth, and after such good results, they’ve escalated one position and are now third overall.

Next week / Cardinals: This is the real fire test for this team this season. Arizona has defeated San Francisco 8 straight times, including a series swept for four years in a row.

The Packers are currently running on a 4-game winning streak, including a close 31-24 win over the Chiefs on Week 8. Last week they were third overall, but they’re still close at the fourth position heading to Week 9.

Next week / Chargers: The Packers are visiting Los Angeles to face the Chargers. This is the first time these two teams face each other since 2015. As of late, Green Bay owns this series, having won the last 7 games dating back to 1993.

Vikings have won four straight, including a 19-9 victory over the Redskins on Week 8. The Vikes were seventh last week, but after some continuous positive results, they are now fifth overall.

Next week / Chiefs: This is the first time the Vikings are visiting Arrowhead Stadium since 2011, and the first meeting between the two since 2015. That last meeting ended up in a close 16-10 win for the Vikes at Minnesota.

Quarterback Lamar Jackson and the offensive of this team has been pretty solid this year. But the same can’t be said of their defense. However, traded for cornerback Marcus Peters recently, and this player was outstanding versus the Seahawks, showing that Baltimore can reshape their defensive plans and be ready for what’s coming.

Next week / Patriots: The Ravens are facing their toughest challenge yet this season as they’re hosting the Patriots, a team that hasn’t lost, and that appears unstoppable.

The Seahawks bounced back from their second loss of the season on Week 7 to the Ravens with a close 27-20 win over the Falcons on Week 8. It seems like the Russell Wilson / DK Metcalf duo is ready to inflict more pain on rival offensive lines.

Next week / Buccaneers: The Seahawks are returning home to host the Buccaneers, a team they haven’t faced since 2016 when Tampa handled Seattle a 14-5 loss at Raymond James Stadium.

The Colts came up with a close 15-13 victory over the Broncos last week, and that meant their third win in a row. The highlight of the day was T.Y. Hilton, who came up with the big, game-winning play of the day late in the fourth quarter.

Next week / Steelers: Indy is heading to Pittsburgh to play the Steelers, a team they haven’t faced at Steel City since 2015. The Colts are looking for some redemption against the Steelers as they have lost five in a row to Pittsburgh, including a 20-17 narrow loss back in 2017.

The Chiefs hosted the Packers last week, and Aaron Jones hurt their defense deeply in what ended up being a 31-24 loss for Green Bay. They were again playing with Matt Moore as their starting quarterback as reigning MVP Patrick Mahomes wasn’t quite ready to return yet.

Next week / Vikings: The Chiefs are hosting the Vikings, a team that’s suddenly hot with four victories in a row. The last time the Vikes came to Kansas City was back in 2011 when the Chiefs handled them a 22-17 defeat.

Next week / Redskins: The Bills will be playing their third home game in a row as they’re hosting Washington. The last time these teams played was back in 2015 when the Bills suffered a 35-25 defeat.

So, how are you feeling about the games for Week 9? Do you have your picks ready? Register now, fund your account, and head to our sports betting area. Get your bets in and enjoy the best football betting bonuses only at HRwager.ag