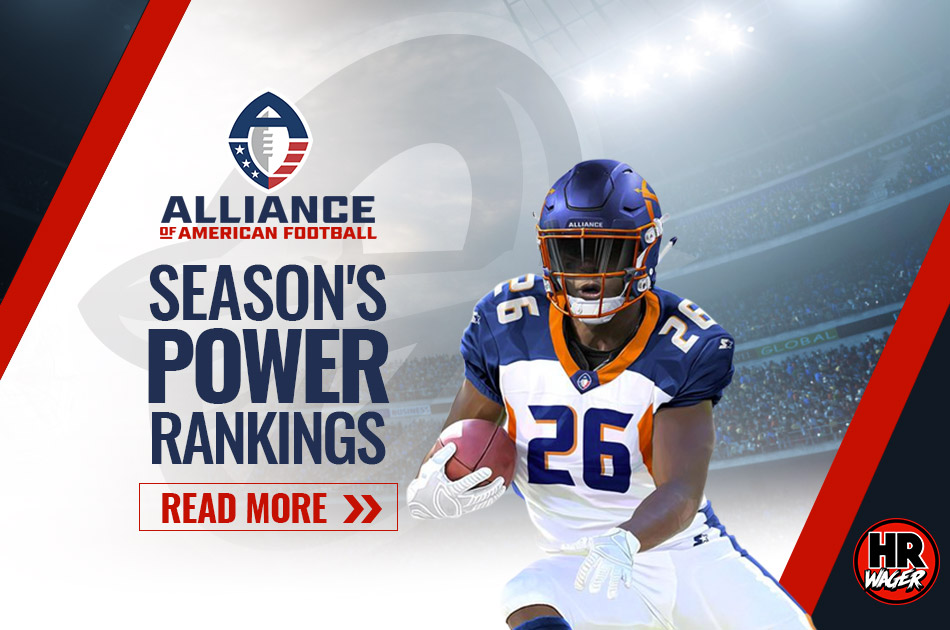 After 3 weeks of the inaugural season, the on-field power structure of the AAF is starting to take shape. While the sample size may still be small, what is clear is that the Orlando Apollos and the Birmingham Iron are the early frontrunners to capture the league’s first-ever championship trophy.

Both Orlando and Birmingham are 3-0 so far this season, with the Apollos having bested Atlanta, San Antonio and Memphis and the Iron winners over Memphis, Salt Lake and Atlanta. The Orlando Apollos have been particularly impressive on offense, leading the league with an average of 393 yards per game for a total of 98 points so far on the season. That’s 25 points above the next-highest scoring team, the Arizona Hotshots.

Ready to wager? Get the best AFF wagering odds and biggest bonuses by registering your HRwager account today. Check out our live football wagering odds here and get into the action today!

Much of the heavy lifting is done by Apollos QB Garrett Gilbert, who leads the league with 827 yards passing. Teaming up with WRs Charles Johnson and Jalin Marshall, Gilbert has five touchdowns already on the season. This week the Apollos match up against Salt Lake on Saturday at 7pm. The game will be aired on the NFL Network. Salt Lake currently sits in last place in the Western Conference, so it is likely that the Apollos continue their winning streak through week 4.

While Orlando is getting success via offense, Birmingham is getting wins via a tough defense. Their 21 points against are the lowest in the league so far, and with a point differential of 45 they are behind only the Apollos, whose differential is 46. Offensively the Iron are led by former Cleveland Brown/Indianapolis Colt RB Trent Richardson, who has all six of the team’s offensive TDs. Three of those TDs came in a 28-12 win over Atlanta. This week the Iron will face off against San Antonio, who sits in 3rd in the West. The game will be broadcast on CBS Sports Network at 4pm Eastern.

The other two early standouts in this fledgling league are Arizona and San Diego. Arizona, as mentioned earlier, has the second highest point total behind Orlando, as well as the second highest YPG total. The Hotshots standout so far is WR Rashad Ross, who played for various NFL teams dating back to 2013. Ross is currently second in the league in receiving yards with 221. Arizona is up against Atlanta this week at 8pm Eastern on NFL network.

San Diego, who sits atop the Western conference standings, is coming off a week three comeback win against San Antonio. After Fleet QB Philip Nelson threw an interception on the very first snap of the game, the Fleet came roaring back to score 16 in the second quarter and secure a 31-11 victory, their second of the season. The Fleet are one of the more complete teams in the league; they are the third most productive offensively while being the second-stingiest defensively. They also lead the league in sacks as a team with 12. This week they take on the Memphis Express, who are the other winless team in the AAF that game will be aired on B/R LIVE at 4pm Eastern.