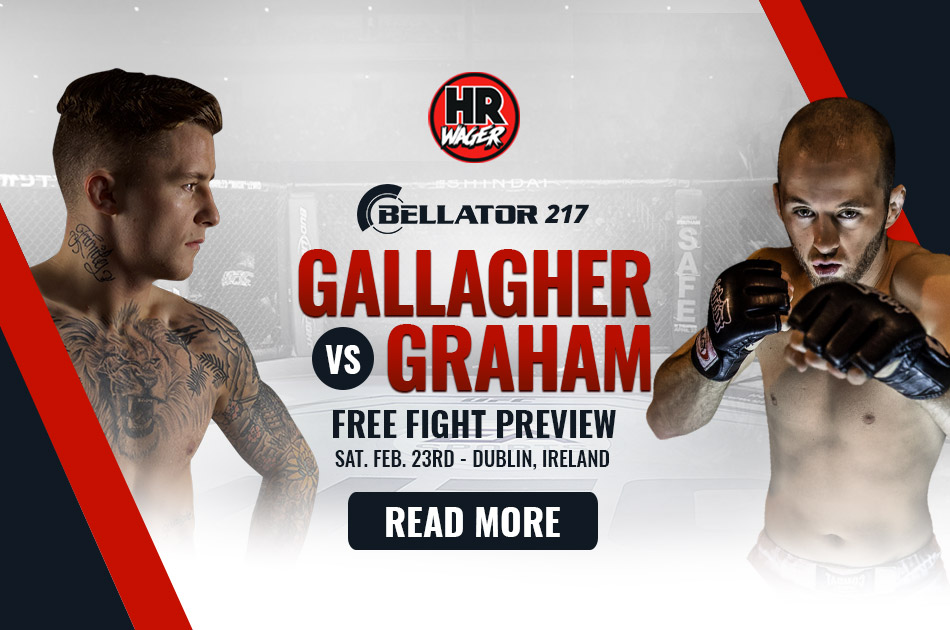 Twenty-two-year-old James Gallagher, who wants to be the next Connor McGregor, is trying to bounce back from his first ever loss of in his pro career (7-1-0) this weekend in a highly promoted fight against relative unknown Steven Graham in front of a home crowd in Dublin this Saturday at 7 pm Eastern.

The last time we saw Gallagher, he was KO’ed by Ricky Bandejas back in August of 2018, after coming back from a 14-month absence due to injury. While Gallagher went into that fight with all the energy, hype and brash trash talk that made him famous, the fight itself was a huge disappointment for the young star. Bandejas made quick work of the Irishman, landing a right to the face that sent him to the mat and then following it up with a spectacular kick to the Irishman’s jaw which put him down for the count.

Get the best Bellator wagering odds and biggest payouts here at HRwager.ag. Get into the MMA wagering action by registering your account today and choosing your welcome bonus.

“My life unfolded in front of me after the loss,” said 22-year-old Gallagher, “I broke down. I was on the floor for about 45 minutes afterwards, I was in tears and couldn’t stand up. It was the worst feeling I have ever had in my life, but I’m going to learn from it. I’m going to carry on and carry this motivation into the gym.”

This time around, Gallagher will no doubt be more prepared and more desperate for victory against the 6-3-0 Graham who is getting his Bellator debut in this fight. The matchup is an excellent opportunity for the 28-year-old Kansas City fighter to make a name for himself in the sport. Graham is riding a streak of five wins, four coming by submission and one by TKO.

While this match is more or less set up for Gallagher to win, with the home crowd in his favor and the obscure opponent, there is still a lot that Gallagher has to prove in this fight. Graham is no slouch, and he insists on winning.

“That’s what I’ve worked almost 10 years for. I have been doing this stuff a long time, I’ve been working for it, and I can’t wait. I’m ready for all of this to happen and this was always the plan. It just took a long way for this to happen. I don’t see it going out of the first round. I see me finishing him somehow in the first round.”

Both fighters are relatively similar both in size and style. Clocking in at 5’9, 135 lbs, they both possess a good ground game with excellent technical skills. The only difference that stands out is the quality of opponents Gallagher has faced is much better than that of Graham. Four of Graham’s last five wins have come against fighters with a losing record.