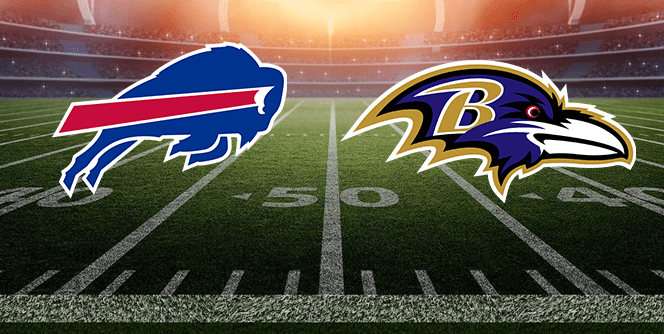 The Ravens, with a 10-2 record, will be visiting the Bills, who have won 9 and lost three this current season. This is a potential playoff preview between two of the top teams in the AFC. Baltimore managed to take the top seed in the conference from the hands of the Patriots last week, and now they are basically in control of their destiny.

HRwager is the home of the best NFL betting bonuses and promotions. Register now to receive an incredible bonus on your first deposit.

The Ravens are the current hottest team in the NFL. They are on an 8-game winning streak and have defeated the Patriots and the 49ers, the two best teams after them.

But, they have never had the first seed in the postseason, so this is unfamiliar territory for the Ravens, and with just four games remaining in the schedule. This can prove to be a challenging game for them as Buffalo ranks third in the league in total defense, surrendering only 300.1 yards per game.

The good news for this squad is that the Bills are giving up 104.3 rushing yards per match, and this should help a Ravens offense that’s currently ranked number one in the NFL. Much of the Ravens’ success is because of Lamar Jackson, a quarterback who’s also a very dynamic runner (he has amassed an impressive 977 yards), and these running abilities are precisely what’s keeping his team atop of the other title contenders. Despite what the league says, he has still not beaten any single team with his arm, and this means that he has a lot of work to do to become an accomplished passer. Jackson has not thrown for more than 250 yards since Week 3!

The Ravens traded for Marcus Peters to enforce their secondary. Plus, John Brown and Cole Beasley are great additions as they have combined for ten touchdowns. And let’s not forget about rookie Dawson Knox, who has also had a significant and positive impact on the team.

Baltimore is coming from a huge victory over the 49ers, and they are fired up for this one.

It certainly won’t be a shock at all to see the Bills taking this match. They are currently 9-3, and right now, they have the first wild card spot.

Buffalo is also just one match behind the Patriots for first place in the AFC East. The Bills will be playing this game at home, which means that they will count on the support of their fan base, one of the most loyal in the country.

Although Josh Allen is not the best quarterback in the league, he’s a real fighter, and that courageous spirit is precisely what’s needed to win crucial games in the NFL. He was able to complete 60% of his passes every single game. And, he has not been turning over the ball at all this current season, with just a single interception in the previous seven games.

Allen, along with Frank Gore and Devin Singletary, has also led Buffalo to 137.9 rushing yards per match. This stat is fifth in the league, and they are certainly not slowing down at all.

Register now for an account here at HRWager, and get action on all the upcoming NFL Week 14 games!