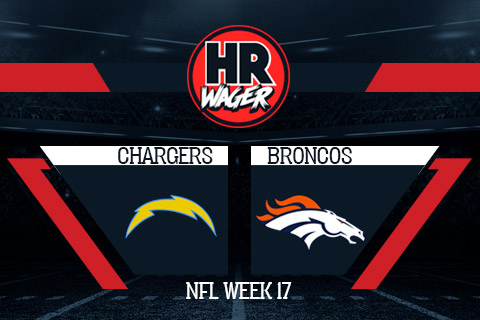 While it may not look like a big matchup on paper, Sunday’s 4:25 pm game in Denver has massive playoff implications. The Chargers are a lock for the postseason, but who they play depends mightily on how they do in this game. A win combined with a Chiefs loss to the Raiders will give the LA Chargers first place in the conference, while a loss keeps them in a wild-card spot. Chargers coach Anthony Lynn has already lost twice to the Broncos in his three-year tenure with the team, including a matchup in November of this year when his team fell by the slightest of margins, 22-23.

So will the Chargers continue their winning ways en route to the postseason? Or will they get leveled by the Broncos on the last day of the regular season? Head over to our sportsbook to get a look at the latest lines and decide for yourself who gets the nod. Make a wager today right here at HRwager and enjoy the best football wagering odds for this final week 17 Sunday football action!

The Broncos make a compelling case as an underdog. They are one of the few teams that has had success against the Chargers this year and have owned the matchups over the last decade or so.

On top of that, the Chargers are coming off a devastating loss to the Ravens last week that cost them a shot at first place in the conference. The Ravens held them to season lows in yards and points. Now come the Broncos, who have won the past five meetings between the two teams in Denver, and the Chargers have a situation on their hands.

“(Denver) beat us the first time when we kind of fell apart at the end, but give them credit,” Chargers quarterback Philip Rivers said. “We want to win the last game and regroup and go from there. We’re just going to worry about us. Let’s just focus on us and get back playing the way we played most this year.”

The Broncos, who have no chance at the playoffs, will play the role of spoiler. To successfully do so, they will need contributions from their pass rushers, who have been the lone bright spot on this team. So far this season, LBs Vonn Miller and Bradley Chubb have combined for 26.5 sacs on the season.

In the Chargers game last week against the Ravens, turnovers proved fatal as Baltimore was able to steal the ball early and throw Rivers and Co. off their game.

Rivers will get some assistance against the Denver pass rush from the return of RB Austin Ekeler, who returns after missing the last two weeks with a neck injury.

Denver, on the other hand, will be without their star RB Phillip Lindsey, who suffered a wrist injury in the Monday Night game against Oakland last week.

The Broncos lead the all-time matchups between the two teams 66-51-1 and have only lost 3 out of the last 15 matchups dating back to 2011.