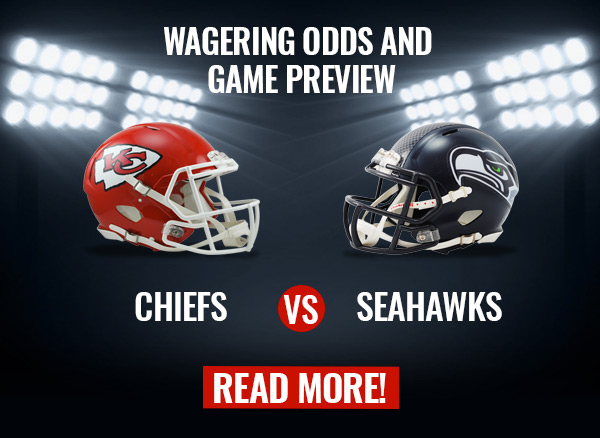 Sunday Night doesn´t get any better than two teams with a chance to clinch a playoff spot on a national broadcast. The high-powered Chiefs can tie up the top spot in the AFC with a win, while the Seattle Seahawks can solidify a wild-card spot with a victory at home. Both teams are coming off brutal losses in week 15, so there will be pride on the line as two teams with bruised egos go at it.

This will be a great matchup with massive playoff implications, so be sure that you have your picks in on time – head to our NFL betting sportsbook for all the latest lines and make your wager asap!

Seahawks Coach Pete Carroll, when asked about the Chiefs’ success on offense this season, was quick to credit head coach Andy Reid.

“I think it’s a fantastic job by their staff and Andy putting together an offense that could make sense to him so that he could execute this well,” Carroll said. “To bring the quarterback along that quickly in a sophisticated attack, that’s a big accomplishment by their coaching staff, and Patrick has made full use of all of it, and he’s had a great season.”

Carroll knows a thing or two about running a good offense, as his Seahawks rank first in the NFL in rushing with an average of 154.9 yards per game. A lot of that is thanks to dual-threat QB Russell Wilson, who has 3,025 yards passing to go with 321 yards rushing. Wilson ranks 3rd in the league this season in passing touchdowns, 2nd in touchdown percentage, and fourth in passer rating.

Russell is benefitting this season from a much-improved Seattle O-line, which relies on a 6-man formation that features the likes of George Fant, Duane Brown, Ed Dickson and Nick Vannett. Those players force opponents to overcome a massive wall of blocking before they can even come close to touching Russell or either of the RBs.

As far as injuries go, Chiefs CB Kendall Fuller had surgery last week on his wrist but did participate in conditioning drills at this week’s practice. Other than that, KC is a healthy squad. Meanwhile, the Seahawks are anticipating the return of LB K.J. Wright from a knee injury that has nagged him all season. Wright´s return is the only good news, however, as neither safety Bradley McDougald nor RB Rashaad Penny has been confirmed to play. Further, RGs D.J. Flunker and backup Jordan Simmons may both be out so that the Seahawks may be down to their third option at that position.