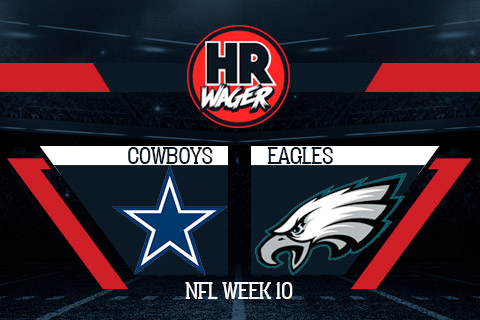 One of the NFL’s greatest rivalries takes to the airwaves this Sunday Night as the Dallas Cowboys invade Philadelphia to battle the Eagles. Both of these teams made significant moves before the trade deadline: the Eagles acquired WR Golden Tate from the Detroit Lions and the Cowboys got Amari Cooper from the Raiders. Both teams made their respective trades in hopes of getting an edge in a very close and volatile NFC East Division. This game could be a catalyst for how the rest of the season plays out, so get excited for this division rivalry and head over to our NFL football sportsbook to make a wager on your favorite pick for this game!

After stumbling out of the gate with a 3-4 record, the Dallas Cowboys went into desperation mode and made the move for Cooper, sacrificing their 2019 first round draft pick in the process.

Cooper has not exactly been lighting the world on fire this season with the Raiders, but he is a former first rounder and pro-bowler, making him an improvement over the current Cowboys receiving corps and a relief on the Dallas offense, which had up until now relied too much on RB Ezekiel Elliot.

Cooper already has one game under his belt with Dallas in their week 9 loss to the Tennessee Titans. He caught for 58 yards and recorded a touchdown. Now that he has had 2 weeks of practice with the team, he may begin to find his groove a little easier.

Dallas will have to work on their defense however, which allowed 340 yards against one of the this year’s worst offensive teams in the league in the Titans. This week will be much tougher against the Eagles, who offensively are 15th in the NFL in yards per game. Dallas has been missing DL’s Randy Gregory and David Irving, but Gregory was at practice this week and is at least questionable for Sunday’s game. Irving appears to still be out.

The Philadelphia Eagles have also had their struggles, bouncing between a losing record and .500 all season. They are coming off a bye in week 9, so they should at least be rested and ready for their rival. Further, three of their next four games are against division opponents, so the Division is theirs to lose at this point. Currently, they sit one game behind the Redskins and one ahead of Dallas.

The addition of Tate should go a long way. Acquired from the Detroit Lions for a 2019 third round draft pick, Tate is excited for his new opportunity and sees this game against Dallas as a great way to make an impression with his new team. He has already faced Dallas once this season, in a 24-26 loss with his old team. Tate caught six passes for 132 yards and two touchdowns in that game.

The Eagles were hoping to get a boost from the return of Darren Sproles from injury this week, but it appears he re-aggravated the injury in practice on Wednesday and is out again.

These teams’ rivalry dates all the way back to 1960, with the Cowboys holding a 66-52 advantage. Philadelphia has won three of the last 5 matchups, but Dallas prevailed in the last meeting, a 6-0 shutout on New Year’s Eve of 2017.