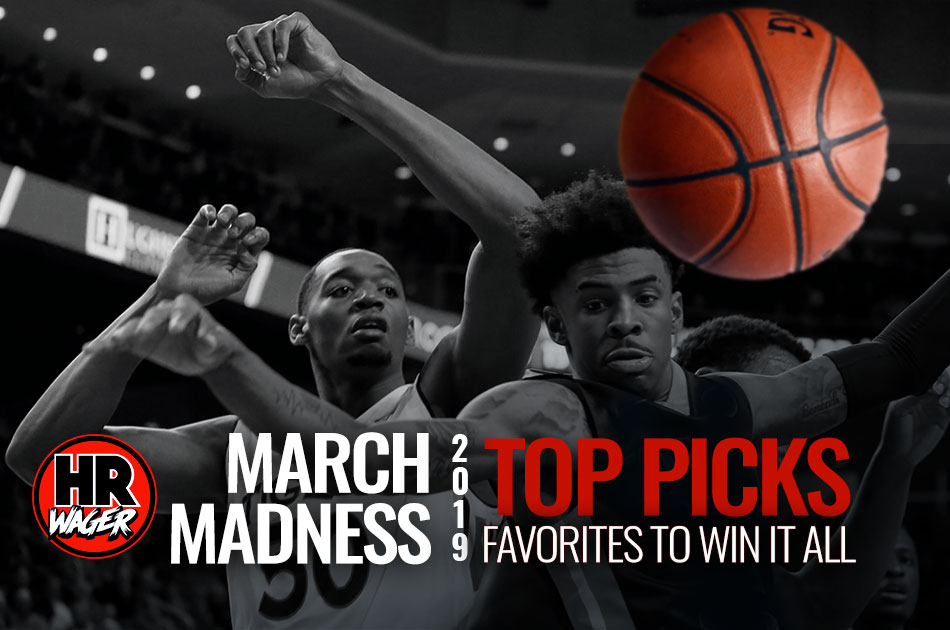 March Madness is finally here, and after weeks and weeks of basketball, only 68 teams are left vying for a chance to cut down the nets at the end of the NCAA Tournament. But not all teams are created equal. Here are the top five teams that are favorites to win it all this season:

The Gonzaga Bulldogs are +125 favorites on HRWager.ag to lift the trophy in Minneapolis. The Zags are no stranger to the tournament, having made it to the championship game just two years ago when they fell short to North Carolina. This year’s team is led by potential lottery pick Rui Hachimura and junior forward Brandon Clarke, who is also projected to go in the first round of this year’s NBA draft. The offense has been the nation’s most efficient for most of the season, and despite their West Coast Conference championship game loss to St. Mary’s, the Bulldogs will be a force to be reckoned with in the West region of the tournament. This is a team that has experience going deep in the Big Dance and many bettors are expecting that this is the year Mark Few’s squad finally puts it all together and wins it all.

Love them or hate them, the Duke Blue Devils are one of the favorites to win it all at +200 odds on HRWager.ag, and it’s no surprise why. The freshman trio of Zion Williamson, RJ Barrett and Cam Reddish could all go in the lottery portion of the NBA draft, with Williamson and Barrett expected to both go in the top three picks. The Blue Devils have struggled at times this season without Williamson but have still remained one of the top teams throughout the year despite its injury woes. The Blue Devils can do it all – beat you inside, drain the three ball and stifle you on the defensive end, and they’ve done it against some of the best teams in the nation. If the ACC Tournament is any prediction, Duke fans and those betting on the Blue Devils are in for a run ride this March.

Last year’s runners-up are one of this year’s favorites as the Michigan Wolverines look to finish the job in 2019. John Beilein’s Wolverines have +275 odds to cut the nets this season thanks to its wings who can stifle opposing offenses while also making shots from all over the court. Sure, the Wolverines will miss Mo Wagner, but freshman Ignas Brazdeikis has been more than capable of playing that role, averaging 15 points per game and shooting 42 percent from the arc. Add in Jordan Poole and Charles Matthew, who is returning from an ankle injury, and it’s no wonder why Michigan is getting love from the bettors who are expecting a return trip to the championship game – with a different result this time around.

The Red Raiders of Texas Tech may only be a 3-seed in the tournament, but that’s not stopping people from putting money on the Big 12 regular season co-champions, who are +550 favorites to win it all. The Red Raiders are one of the top defensive teams in the nation and boast a potential lottery pick in Jarrett Culver, who has made huge strides in his second year, averaging 18.5 points per game and 6.3 rebounds per game. Texas Tech has a tough draw in the West and could potentially face Michigan and Gonzaga en-route to the championship game, but don’t count the Red Raiders out.

The 4-seed Florida State Seminoles round out our list of favorites to win the NCAA Tournament with +600 odds on HRWager.ag. The Seminoles may not be a trendy pick in the brackets, but don’t be surprised to see this team make some noise in the tournament. Playing in the competitive ACC, the Seminoles had the conference’s best inside defense, forcing opponents to live and die by the three-point shot. Just like the ACC tournament, where the Noles made it to the tournament title game, Florida State will look to prove the doubters wrong in the Big Dance.