NFL Divisional Round: Colts vs Chiefs and Rams vs Cowboys Wagering Odds 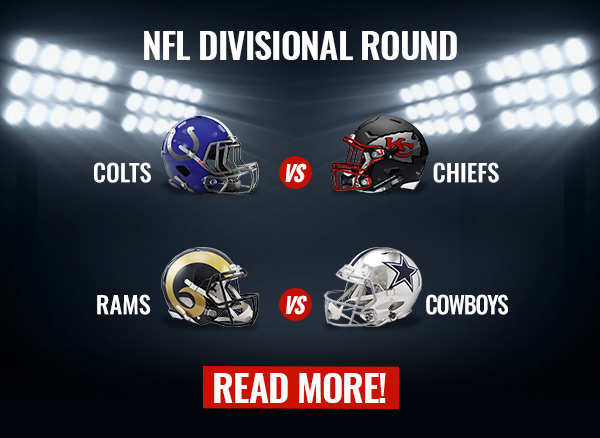 2019 NFL Divisional Round: Colts vs Chiefs and Rams vs Cowboys Best NFL Sportsbook Odds at HRwager.ag

The Divisional Round of the 2019 NFL Playoffs is this weekend, which means four more teams will get shed from contention for the Lombardi Trophy by Monday. The day starts off at 4:35 Eastern with Indianapolis heading to Kansas City to test the mighty Chiefs, who had a bye for the first week of the playoffs. Did time off give the Chiefs the rest they needed or is the momentum train in favor of the Colts? Later, at 8:15 pm Eastern, the Dallas Cowboys head to LA to take on the Rams, who finished in the top spot in the NFC West. The remaining squads are battle-tested, and all have their eyes locked on the prize, so all four remaining games should be packed with intensity.

HRwager has the best NFL wagering odds and promotions, register now to wager on the 2019 NFL Playoffs.

The Chiefs-Colts tilt will be a display of the two top NFL QBs. Andrew Luck of the Colts has come back from an injury that kept him out of the entire 2017 season and led this Indianapolis team back into the conversation for the Lombardi Trophy. On the other side of the field, Chief’s QB Patrick Mahomes had his breakout season this year, throwing for over 5,000 yards and completing 50 touchdowns on the season. Both QBs are playing at the top of their games and we should expect to see the best out of them on Saturday.

Of the four remaining playoff games this weekend, this is the one that looks most to be a shootout. That bodes well for underdog Indianapolis (+5-110 spread, 057-110 total, +193 Money Line) because they have proven themselves to be able to run a high-octane offense while at the same time being defensively sound. The Colts finished the regular season ranked 11th in overall defense. Favorite Kansas City (-5-110 spread, u57-110 total, -233 money line) meanwhile relies entirely on their offense, whereas their defensive capabilities are limited. The KC D was 31st in the league during the regular season in yards given up per game with an average of 405.5.

So if the Colts can get the Chiefs into an actual shootout, their defense may just make the difference in keeping Mahomes and company off the scoreboard for long enough to get a few extra points in. On the other hand, the weakness in the Colts’ defense is the passing game. They ranked all the way down at 16th in the league with 237.8 yards allowed per game during the regular season.

Either way, this game promises to be a high-scoring, offensive affair that you won’t want to miss. Injury-wise, for the Chiefs, S Eric Berry and RB Spencer Ware are questionable, while for the Colts S Malik Hooker is questionable and S Mike Mitchell is on IR. WRs T.Y. Hilton, Dontrelle Inman, and Ryan Grant are all questionable as well.

That sets the tone for the evening game on Saturday, which promises to be just as exciting. The league’s second-best offense in the regular season belonged to the favored LA Rams (-7-115 spread, u49 ½ -110 total, -345 money line), who made swiss cheese out of opposing defenses all season. They will be facing an underdog Cowboy team (+7-105 spread, o49 ½ – 110 total, +285 money line) who had a rough patch to start the season until a trade at the deadline set them on the course to the playoffs. They got there by shutting down the run game of the Seattle Seahawks in the Wild Card Matchup, but can they do the same against the high-octane Rams?

Good run defense numbers is definitely a plus for the Cowboys because they will be going up against a healthy Todd Gurley, who has not played since week 15 of the regular season because of an injury. Gurley was able to rack up 1,251 yards rushing in those first fifteen weeks of the season.

The Rams are also rested and healthy; after receiving a bye for the first week of the playoffs, LA was able to run a full squad at practice this week and will have all of their pieces in place for Saturday´s game.

For the Cowboys, they will rely on RB Ezekiel Elliot to move them up the field; Elliot led the NFL in rushing yards this season with 1434 total. He comes in extremely handy, especially because the Rams do not have good numbers against the run this year. They ranked 23rd in the NFL during the regular season with a 122.3 yards per game average.

The big question for the Cowboys then is if they can stop the Rams passing game, which is one of the best in the league. QB Jared Goff finished the regular season 4th in total yards, and WRs Brandin Cooks and Robert Woods, who combined for 2,423 yards passing on the season.