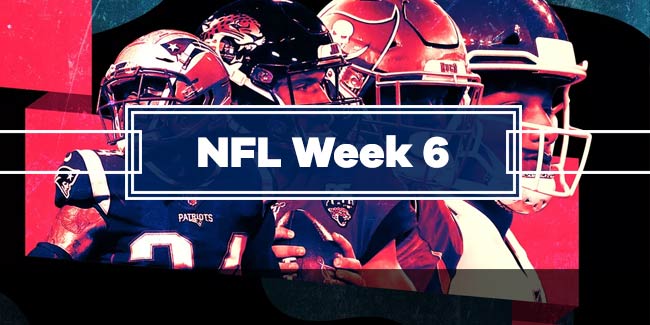 Here are three NFL betting previews for Week 6, starting with games featuring some of the best teams in the NFL, and finishing with a preview of the game between the worst two teams in the NFL.

The Games Featuring the Best Teams

These are the two games featuring two teams that currently hold high spots at the NFL power rankings:

The Chiefs entered their game versus Indy in Week 5 as one of the only unbeaten team, but they ended up with their first loss of the season, and with a limping starting quarterback. Although he played the full game, Patrick Mahomes got injured in his left ankle, and that can be an important factor when they face the Texans in Week 6.

Bet on the Texans vs. Chiefs game with the best NFL betting odds. Get the fastest payouts and amazing bonuses on top of your deposit. Register Now!

Houston has been a little erratic during the start of the season, but after a convincing 53-32 win over the Falcons last week, they’ve proven that they’re getting their house in order.

Will Mahomes be ready for this game? If he is, then Kansas City has the option to continue to dominate the top power ranking positions in the NFL. Otherwise, the team may begin to struggle, primarily because of their deficient rushing offensive.

Philly and Minnesota are both coming to this game after very convincing victories in Week 5.

The Eagles were able to defeat the Jets 31-6 while the Vikings took down the Giants 28-10.

Now both of these teams are 3-2 and will be looking for their fourth win of the season when they meet at U.S. Bank Stadium.

Ready to bet on the Eagles vs. Vikings? Register now to place your bets.

Although the Eagles will be visiting, they are coming with lots of confidence after defeating the Cowboys, proving that they have what it takes to beat title-contending teams. Considering how wide open the NFC is right now, this could be a preview of a potential NFC title game or even a game between two teams that could miss the postseason. It all depends on how everything goes down.

According to the experts, if Philly manages to get healthy, they could turn into the best football team in the conference.

There’s good news for both Dolphins and Redskins fans, as their respective teams will be playing each other!

Yes! The battle of the teams that haven’t won a single game this current season. They are set to play in Week 6 at Hard Rock Stadium.

So, in a battle of the current worst teams in the league, anything can happen, and both have the chance to win their first game of the season, with Miami holding a little edge as they’re home for the game.

Washington is the actual favorite with -3½-105 and a -182 money line. Miami lost its past games by a considerable margin, and nobody wants to label them as the favorites for any games at all.

But things are not as bad for this particular game, as they are -3½ point underdogs, so the opening line is pretty close, probably because the Redskins are a very dysfunctional team at the moment.

Redskins Will Feature a New Coach

Now, what’s interesting about this match is that the Redskins will be featuring a new head coach as Washington decided to fire Jay Gruden after a 0-5 start.

Yes, after going 35-49-1 in six seasons, the team decided it was time to get a new leader. The man called to replace Gruden is Bill Callahan, the current offensive line coach for Washington. Callahan will assume on an interim basis, but he has already coached the Raiders in the NFL, and the team of Nebraska in college football.

As you can see, Week 6 will be featuring games that you definitely want to watch for different reasons.

Add more excitement to these games by placing a bet on them. Register now at HRwager and enjoy the fastest payouts in the industry.