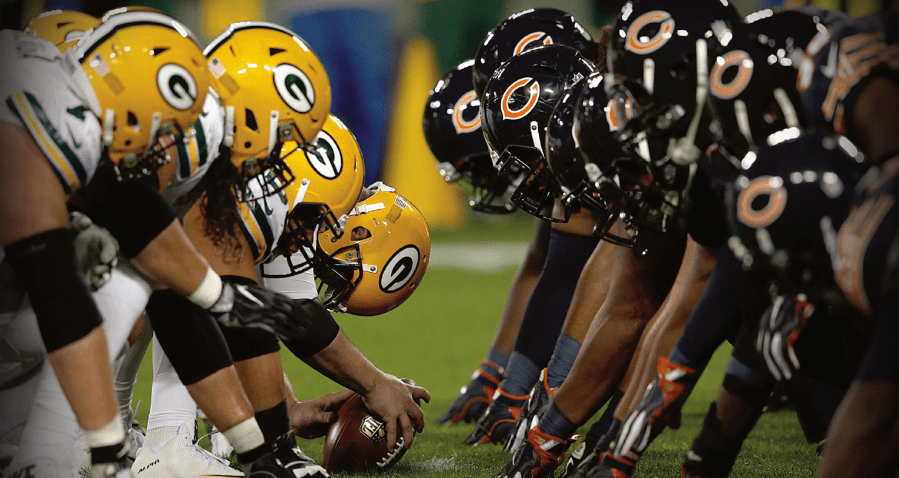 The Bears are visiting the Packers, and they should be a bit concerned, as Chicago has lost their last eleven at Lambeau Field. This is a trend Green Bay wishes to continue as they are getting closer and closer to the NFC North title.

The Packers are entering this game as the second seed in the North, while Chicago can’t afford to lose one more if they want to get a wild card for the postseason.

Get the best Packers vs. Bears odds and bet on this exciting game right here at HRwager. Register now to place your bets.

The Bears, who are currently carrying a 7-6 record, must defeat Green Bay, and get some extra help to advance to this year’s playoffs.

A postseason Chicago appearance is a long shot, but this is not such an unrealistic scenario as it was just a few weeks ago, when this team had a poor 3-5 record. The team has managed to take 4 of 5 since then, and it’s precisely how they won those matches that have fans of the team with high hopes about what’s coming for the Windy City franchise.

Starting quarterback Mitch Trubisky was at his best last week versus the Cowboys, throwing for 244 yards and three touchdowns, and adding 63 yards.

With that said, the third-year player has not been running a lot, rushing for only 26 yards on eight attempts in the first twelve games for his team.

The Bears are +4-105 against the Packers. Take advantage of the best NFL betting odds and win big as we get closer to the postseason. Register now to bet on the Bears.

When it comes to divisional games, the Bears have been leaning heavily on their defense, going UNDER in six of their last seven games versus NFC North rivals. This consistent stop unit took a big hit last week, as linebacker Roquan Smith, the leading tackler for the Bears, suffered a season-ending injury.

However, not all things are negative for Chicago’s defensive lineup, as Pro Bowl Akiem Hicks is expected to leave the injured reserve, making his first appearance with the team since Week 5.

The Packers are -4-115 against the Bears. Can they cover the spread? Register now to place your bets and receive the biggest NFL betting bonuses online. HRwager is the best place to bet on the NFL.

If there’s something consistent about Green Bay’s offensive lineup is how inconsistent it has been. They finished with 31 points versus the Giants, but their offense only generated eighteen first downs and 341 total yards versus the Redskins.

During that game versus Washington, Aaron Rodgers, their starting quarterback, had only 195 air yards, as Green Bay scored twenty or fewer points for their third time in their previous five matches.

But the Packers are winning, and Rodgers doesn’t care about how they get those victories, mentioning that “We’ve got to clean some … stuff up, but I wouldn’t mind winning ugly all the way to the Super Bowl.”

And, a big reason why fans of the Packers must remain optimistic, is that they are tending to follow up ugly games with strong performances, going 7-0 ATS in their last seven matches following an ATS defeat.

Register now, and get your action on all of the upcoming Week 15 games!