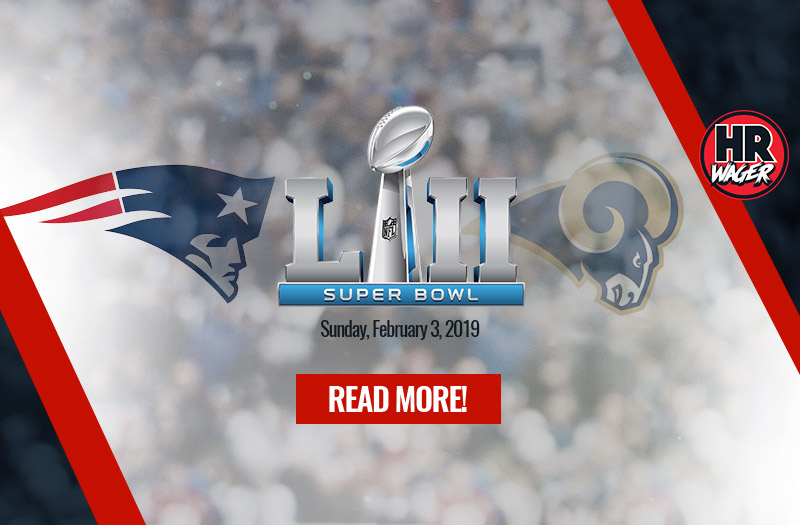 With Super Bowl LIII right around the corner, it’s good to start thinking about how things are shaping up and what kinds of bets are worth making on this year’s game. As has been the norm for the last decade, prop bets are becoming more and more of a phenomenon, so along with traditional betting on the game, we thought it would be good to look at not only the game itself but some of the fun and exciting prop bets that are available here at HRWager.

For the actual game, the Patriots are the favorite to win with a spread of -2½-115, o56½-110 total, and -140 money line. They are the always competing in the Super Bowl and have more big game experience than the up and coming Rams. Further, Bill Belichick is a football wizard with seven Super Bowl victories as a Head Coach and Defensive Coordinator, while Rams head coach Sean McVay, although impressive, is still only 33 years old and just in his second season. Further, the Patriots have owned the Rams over the last two decades: dating back to 2002, these two teams have played five times and the Patriots have won every single match with a combined score of 154-72. ALso, the team has not been the same after winning the Monday Night Football game back on week 11.

However, that does not make the Rams a lousy bet; they have had 2 weeks to rest and, if the time off helps to re-ignite their offense, they are a very dangerous offensive threat.

Place your bets on the Patriots or Rams by registering your account now, take advantage of the best football wagering bonuses and biggest selection of prop bets for the Super Bowl.

There are quite a few interesting options out there regarding team bets:

Rams to score every quarter: Yes (+140) No (-170) The Rams scored in every quarter of most of their games in 2018. The only exceptions were against Philadelphia, Chicago, Minnesota, Green Bay, and Arizona. Only two of those teams were playoff teams. Against the stiffest competition, the Rams offense always brought the heat. They have a good chance of continuing this trend against the Patriots.

Total Match Points: Both teams have strong defenses, so it does not look like it should shape up to be a high scoring game. In their two previous playoff games, the Rams held the Cowboys to 22 points and the Saints to 23. The Patriots also kept the Chargers to 28 points and the Rams to 31 in their two playoff matchups so far this year. Our sportsbook offers a wide range of point total possibilities, some of which are very lucrative in the lower scoring end. For example, the money line for the point total to be between 43-49 points is +550.

Interceptions: This game will feature two excellent QBs who are on opposite ends of the age and experience spectrum; No matter who you are the nerves of this game and its enormous stakes will have an effect, and you can expect the nerves of Jared Goff to be about 100 times worse than whatever Brady will be experiencing. If any interceptions happen, expect them to happen to the Rams.

Don’t forget to register your account now and enjoy all the Super Bowl LIII wagering action with us at HRwager.ag