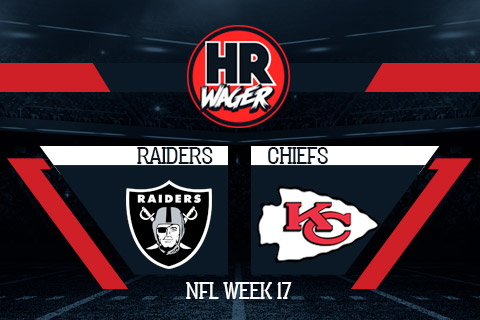 The Chiefs have a chance to close out their season at home on Sunday, where they can lock up first place in the AFC West along with home-field advantage for the rest of the AFC playoffs. All they have to do is beat their lowly rival, the 4-11 Oakland Raiders.

Oakland, meanwhile, will be playing for pride as they have an opportunity to put a positive spin on the end of their season by beating their arch-rival on the road and putting a big bump in their way through the playoffs.

Can Oakland pull off an upset or will Patrick Mahomes and the KC football machine finish the regular season with a bang? Head over to our NFL sportsbook to find the best football wagering odds and make sure to make a wager before kickoff on Sunday at 4:25 on Sunday!

QB Mahomes is determined to win this game after Kansas City has lost their last two games in a row and three out of their last 5.

“We want to make sure that we’re staying here the rest of the way out,” Mahomes said about the playoffs. “We know that if we can come together and play like we know we can, then we can make a run at this thing.”

The last time these two teams met, the Chiefs came out on top 40-33 in Oakland.

The Raiders are coming off a win last week against Denver, a 27-17 Monday Night Football thriller that may have been the final game for the team in Oakland. The Raiders are set to move to Las Vegas in 2020 and have not secured a stadium to play in for 2019. That game may have given them the momentum necessary for an extra push against Kansas City this week.

However, there is also the question of the 2019 NFL draft; a Raiders win could hurt their position in the draft, which is more useful to them than a win at the end of a lost season.

Raiders Head Coach Jon Gruden thinks otherwise, and he made it clear that his mission is to help his team win Sunday’s game.

“It’s our archrivals, and we want to win just like everybody else,” the Raiders’ head coach said. “Just because we’re not going to the playoffs doesn’t mean we’re going to go out there and pack it in. We want to win. We want to play hard. We’ve got guys playing for jobs, and we got a strong desire to compete and a real will to win here.”

These two teams have a history that dates back to the 1960s. The Chiefs lead the all-time matchups 64-53-2. The Chiefs have also won 9 of the last 11 matchups going back to 2013. Regardless, these teams are bitter rivals and often put on a good show. Of the previous 10 games, five of them have been decided by less than ten points