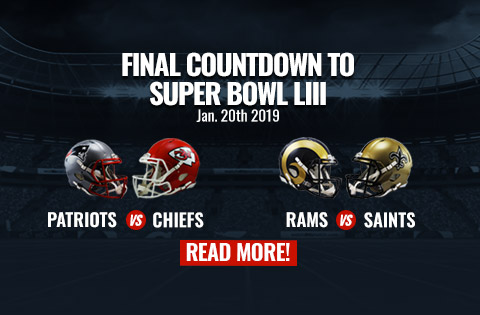 In the 2018 regular season, two teams tied for the best record: the LA Rams and the New Orleans Saints. Now, those same two teams will go head to head in the NFC Conference Championship at the Mercedes-Benz Superdome in New Orleans at 3:05 pm Eastern on Sunday.

These teams were expected to meet in this game since early in the season. The Saints lost their first game to the Tampa Bay Buccaneers but came back with a 10-game win streak that established them as an early favorite to win the Superbowl. They would later lose to the Cowboys in week 13 and again on the last game of the regular season against the Panthers, but by that time they had already clinched a spot in the playoffs.

The Rams have a similar story; they made it to week 9 without a loss, steamrolling teams with their impressive offense powered by RB Todd Gurley and the passing attack of QB Jared Goff and WRs Brandin Cooks and Robert Woods. Together with the rest of the team, that group completed 60 total touchdowns in the regular season to their opponent’s collective 44. They won a huge matchup 54-51 against the AFC regular season champ Kansas City in week 11 but dropped games in weeks 14 and 15 to the Bears and the Eagles, who were playoff-hungry at the time after LA had locked up a spot in the playoffs.

The one time these teams met in the regular season was back on November 4th, with New Orleans winning 45-35. In that game, the Saints had gained a 35-17 advantage by the half, but LA came back to tie the game in the 4th quarter. The Saints scored a field goal on their ensuing possession, and then with three minutes remaining in the game Saints QB Drew Breese launched a pass to Michael Thomas for a 72-yard touchdown, sealing the win. That game was LA’s first loss of the 2018 regular season.

The Saints are favored to win this matchup as well, but only slightly according latest wagering odds. New Orleans has a -3 ½ spread, u57-110 total, and -175 money line. The Rams currently hold a +3 ½ -115 spread, o57-110 total, and +155 money line. Register Now and place your wagers, choose your team and check out our huge selection of props for this game.

The matchup will be one of the best of the year, as both teams try to lay claim to the NFC title and possibly the Super Bowl. As the top two offensive teams in the NFC, they should put on a high-scoring affair, as it was the last time they met. The defense will be critical, and to that end, the Saints hold the advantage. Their defense was second overall in the league in yards given up per game during the regular season with 250.

The Rams didn’t start off the season with the best defense, but after a late surge, they found themselves in the top five in YPG for the regular season with 308.

New Orleans also has an advantage by playing at home, as their dome is one of the most unique and boisterous in the league.