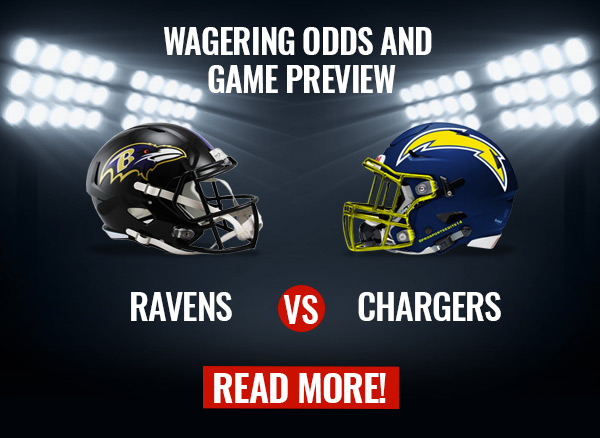 The Ravens, who boast the NFL´s best defense, will be in LA to take on the Chargers, who have the current longest winning streak in the NFL with four straight wins, including a last-minute nail-biter last week against the Chiefs. While the Chargers are securely in a playoff spot and competing for the top spot in their division, the Ravens are hanging on for dear life. They are currently in the AFC´s 6th seed, which puts them in the playoffs, but Indianapolis and Tennessee are hot on their heels.

It should be a hot one in the city of angels this Saturday night, so crack a cold one and belly up to our online sportsbook, where we have all the up to date football wagering odds for this and all the other NFL games of the week.

The Chargers will certainly have momentum on their side, coming off what was one of the most dramatic wins of the season in their week 15 win against Kansas City, in which they overcame a 21-7 deficit after the first half to come back cap off a win with two exciting touchdowns in the final four minutes and a 2 point conversion with only 4 seconds remaining in regulation. Chargers WR Mike Williams was spectacular in the effort, as he had 76 yards on seven receptions.

The Chargers should have another ace up their sleeve in RB Melvin Gordon, who completed the practice for the first time since a knee injury in week 13. Gordon has 13 touchdowns on the season and has been named to the Pro Bowl, and he expressed his eagerness to get some games in before the playoffs.

Baltimore will hope that their defense is enough to get them through this game, which is the toughest remaining on their schedule. Currently, they are 8-6 in the 6th seed and have a week 17 matchup against the Browns. If they win both games, they can solidify their position in the playoffs, but if they lose this week they will have set themselves up for a possible must win in the final week of the season.

“You think you need to win every game,” said Ravens cornerback Marlon Humphrey. “So, this is really no different. We’ve been feeling that since we’ve got back off the bye week — that every game is going to be a playoff-type game. It’s definitely big going into this one — Saturday night, prime-time game. It’ll definitely be huge to get this victory.”

Injury-wise, the Ravens are working with almost a full squad. DB Anthony Levine missed practice this week, and OLB Matthew Judon was limited with a knee injury but is expected to play. Judon is tied for the team lead in sacks with seven.

These teams have clashed 11 times in NFL history, with the Ravens holding the advantage at 6-5. The last game was a 2015 matchup in which the Ravens won 29-26 at home.