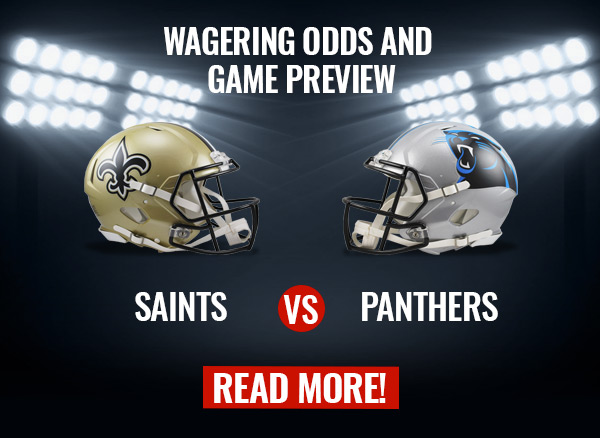 The New Orleans Saints may have clinched the NFC South already, but that doesn’t mean that Drew Breese, Alvin Kamara, and company are going to let up on divisional rival Carolina Panthers this Monday. Panthers RB Christian McCaffrey is also having a season for the record books, and he is not about to let the Saints spoil his night on the big stage. This game will pit the League’s no. 2 rushing offense in the Panthers against the no.1 rushing defense of the Saints.

Our football wagering sportsbook is awaiting your visit! Come for the current live lines, stay for the big wins. New Orleans invades Bank of America Stadium in Charlotte, North Carolina for what should be a great night of football!

Saints QB Drew Breese is coming off a sensational game last week in which he went 24 for 31 in a spectacular, 25 point second half comeback against the Tampa Bay Buccaneers. The win helped them solidify the top spot in the NFC South going into the playoffs. To date, Breese has 3,500 yards, 31 touchdowns, and only four interceptions.

“That was the epitome of a great team win,” said Breese after the win.

Both defense and offense are clicking on this Saints squad. Breese, RB Alvin Kamara and WR Michael Thomas are all having career seasons; meanwhile, the defense has been lethal against the rush all year, averaging 77 yards given up per game all season.

“It’s fun,” Breese said of the relationship between offense and defense. “We feed off of them, I hope they feed off of us at times, and obviously special teams coming up with big plays in key moments too, so it’s a team effort.”

The Panthers are on the other end of the success spectrum, having lost six games in a row. After winning four of their first five games of the season, the wheels fell off the bus and they have been horrifically dropping games. They now must win at least two of their next three games if they are to have hope to make the playoffs. The bad news is that two of their remaining three games are against the Saints.

Last week against the Browns, Cam Newton went 26 for 42, and his offense was only able to gain 96 yards rushing. Newton also failed to convert on fourth and goal and gave up a crucial interception with under a minute left.

The bright spot on this team is RB Christian McCaffrey, who last week had his 12th and 13th touchdowns, which ties a franchise record for most touchdowns in a single season by a RB. In only his second season in the league, he is setting a pace for a spectacular career.

Injury-wise, both teams are coming into this one pretty healthy. The only major players who may be out are New Orleans LT Terron Armstead and Carolina Kicker Graham Gano. Armstead has missed the last four weeks. He participated in practice this week but is not confirmed for Monday’s game. Gano has missed the last two weeks but may be ready to go for Monday.

The Panthers lead the all-time head to head matchup vs. the Saints 24-23-0. The Saints, however, have won four out of the last five matchups dating back to 2016.