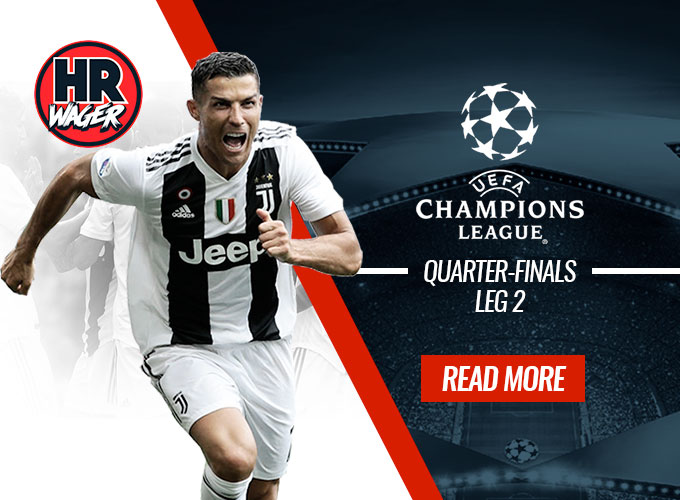 UEFA Champions League action is reaching a boiling point – this week we will get to see who the semifinalists are as the second leg of Quarterfinal games takes place on Tuesday and Wednesday.

The first two games are the biggest, with Manchester United traveling to Camp Nou to take on Barcelona and young Ajax play visitor to Cristiano Ronaldo’s Juventus in Turin. Both games are at 3 pm Eastern.

On Wednesday, Manchester City will try to overcome a 0-1 disappointment against Tottenham in the first leg as they host Hotspur at Etihad Stadium. Liverpool will be facing Porto in Portugal at the same time, 3 pm Eastern.

Wager on Juventus vs. Ajax right here at HRwager Sportsbook, get the best soccer wagering odds and biggest promotions today by registering your new account.

Ajax is young and exciting and fun to watch, but they will need to be a lot more than that if they hope to overcome an experienced Juventus team at home. Cristiano Ronaldo is playing at his absolute best coming off an injury, having scored his record 125 UCL goal in the first leg of this matchup, a 1-1 tie in Amsterdam.

That isn’t to say that an Ajax win is impossible; after all, Juventus will be without their captain Giorgio Chiellini and forward Mario Mandzukic. Argentine Paulo Dybala is expected to wear the captain’s band for this matchup. Expect to see him in the attacking trident alongside Ronaldo and Federico Bernardeschi.

Unfortunately, Ajax may have to deal with injury issues of their own as midfielder Frenkie De Jong is possibly out with a hamstring injury.

Juventus has been in a similar, more pressing situation already in this same tournament. In the round of 16 against Atletico Madrid, they lost the first leg 2-0 only to come back and demolish the Spanish Club 3-0 in the second leg.

Manchester United is facing an uphill battle as they try to defeat Barcelona on the road after a 1-0 loss at home in which Barca pretty much-dominated play. In that first matchup, United couldn’t even force Barcelona goalkeeper Marc-Andre Ter Stegen to make a save. Barcelona also has history on their side for this matchup; they have not lost a Champions League home game in their last 30 matches at Camp Nou, dating back to 2013.

The one thing Manchester United will have going for them in this game is their experience against PSG earlier in the tourney at the round of 16 when they came back from a 2-0 loss at home to score 3 goals in Paris and win. If they can replicate that against a similar (although more potent) Barcelona team, then they have hope of advancing.

The odds are closer in this one than one may think. Liverpool is still the favorite after winning the first leg 2-0, but they are more focused on their Premier League tourney and may decide to rest players in this matchup in order to have everyone healthy for the domestic league. These teams met last year in the Champions League Round of 16, and Liverpool demolished Porto 5-0.

The big news in this game is that Harry Kane will not be available after going down in the last match, which Tottenham still won 1-0 thanks to a Son Heung-min goal in the 78th minute. That puts the pressure on Manchester to win by a pair of goals at home, which they should be able to do easily.