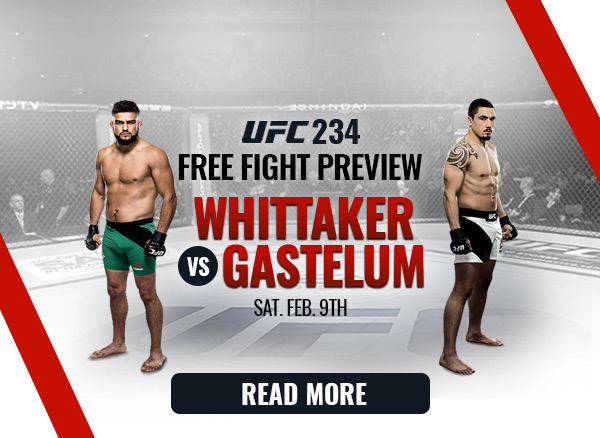 On Saturday, February 9th at 9:00 pm Eastern, UFC 234 will take place in Melbourne, Australia. The card features a big-name main event as Aussie middleweight champion Robert Whittaker will take on the up and coming Kelvin Gastelum.

The 6-foot, 185lb Whittaker is the favorite going into this match (-245 money line) and for good reason; he is a solid, well-rounded fighter in all aspects of the sport and will be fighting in front of a raucous home crowd. Whittaker is no slouch when fighting down under – he has only lost one bout in 15 on home soil. He is the first Australian to hold a UFC title and his overall record is 20-4-0. His last two matches against former champ Yoel Romero have him in the running to be the UFC’s next big thing.

Before facing Whittaker, Romero was 9-0 with seven finishes. He also has an Olympic Silver medal in freestyle wrestling. Whittaker gave the Cuban sensation everything he could handle in both matches, and it was revealed afterward that Whittaker fought through injury, a testament to his stamina and drive.

Register now and get into the UFC 234 wagering action with the best UFC betting odds here at HRwager Sportsbook.

In Whittaker’s last two appearances before the two bouts with Romero, Whittaker had a first-round knockout over Derek Brunson and a second-round finish of Jacare Souza.

The only thing keeping Whittaker from being a household name is the lack of fights over the previous two years; this will be only his third appearance at a UFC event in the last two years.

Gastelum, on the other hand, is a scrappy, preparation-heavy 5-foot-9 fighter with a 72-inch reach who has been clawing his way through the ranks in order to get a shot at a title. He will have to do so as the underdog (+195 money line), but he has confidence that his moment has arrived.

“This is something I’ve been working for almost my entire life,” Gastelum said. “The majority of my teenage years and now my 20s and going into my late 20s, I’ve dedicated most of my life toward this sport, toward this goal, and it’s finally here, and I’m going to do everything I can to make it happen. I’m just excited. It’s going to mean the world to me. I’m going to burst out into tears, just like I did when I won ‘The Ultimate Fighter,’ for sure.”

What Gastelum has against him is his win record; although he is 16-3-0, his victories have come against much lesser competition and has not had a convincing enough win to make anyone think that he could be favored over Whittaker. For example, he beat Michael Bisping when Bisping had only 17 days to prepare and was a split decision to Ronaldo ‘Jacare’ Souza in UFC 224. Before 2017, his wins have come against Tim Kennedy, Jonny Hendricks and a 40-year-old Vitor Belfort.