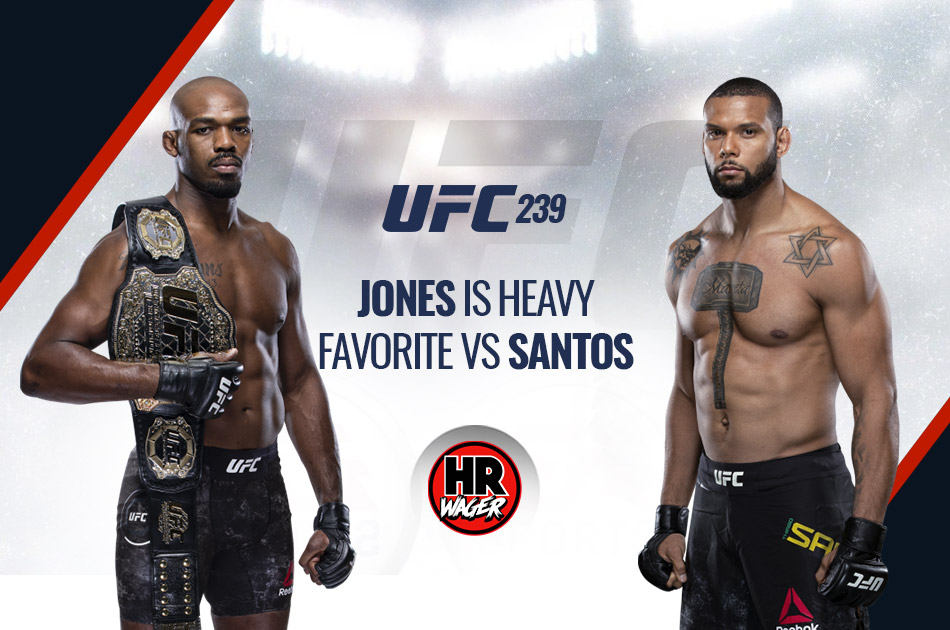 Jon Jones is the greatest of all time, and that’s why he’s the UFC 239 gambling odds favorite.

No fighter has been able to take the light heavyweight title out of his hands, but he’s just a human, and can indeed be defeated!

Now it’s the turn of Thiago “Marreta” Santos, who is getting a shot at the title at UFC 239.

The Brazilian managed to get this opportunity after going 3-0 after switching divisions, defeating Eryk Anders, Jimi Manuwa, and Jan Blachowicz.

Jones has a somewhat controversial personal past, but that doesn’t take any merit out of his professional career.

In fact, many consider him to be the greatest MMA fighter of all time, and his 24-1 record is clear proof of that.

A lot of fighters have indeed tried to remove the title from him, but that has been an impossible task so far.

Jon Jones vs. Thiago Santos Gambling Odds: Whom to Pick

As mentioned above, Jones is definitely the UFC 239 gambling odds favorite at -600, and his opponent is currently listed as the underdog of the fight at +450.

The American fighter is perceived to be untouchable in his division, but if you take a calculated betting risk on Santos, you can end up with a great return on your investment.

Now, Jones vs. Santos odds are the way they are for a reason: Nobody really believes the Brazilian is going to defeat the American.

And, although many consider Santos to be a more powerful fighter, he’ll need to come up with an indecipherable strategy to land his punches on Jones.

And the reason is that Jones is excellent at managing to keep away from striking range when it really matters.

It’s also important to consider that this is going to be the first time “Marreta” is going to be competing at a five-round bout, so, he’s not only going against the best in the game but will also need to fight against time.

Jones, on the other hand, is very used to five-rounders, and chances are that he’ll be able to manage his pacing and energy better than the Brazilian.

All in all, it seems that Jones is destined to keep his title, this unless something very unusual happens!

With that said, do you think Jones us undefeatable? Or do you think the Brazilian will make history by beating the champ?

Make your picks, and head to the betting area to place your wagers!