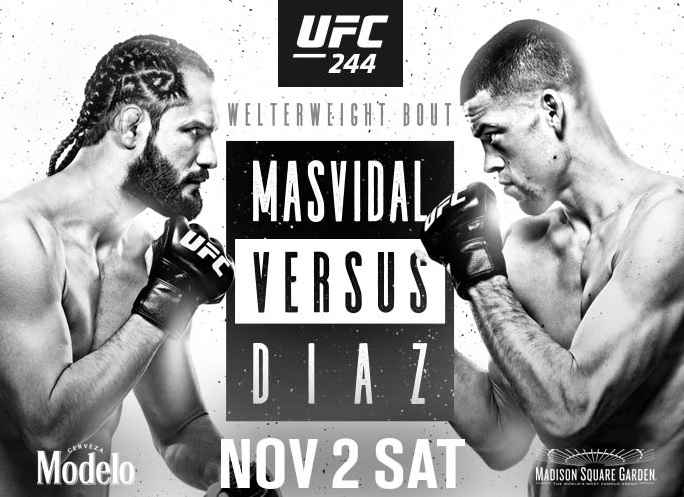 UFC 244 it’s days away from taking place, and here’s a fight preview of what you can expect from the main event and a couple of other exciting bouts from this card.

The BMF: A UFC Title Like No Other in MMA Fighting

All the MMA fighting action is coming to Madison Square Garden on November 2nd with a pay-per-view event that includes a very unique and brand new title, the BMF.

The main card of this event is going to be Nate Diaz vs. Jorge Masvidal. They won’t be fighting for an actual belt, but for a title which Dana White just came up with, the BMF (I’m pretty sure you know what that stands for). According to sources, the winner of this fight will take home a reported $50K.

Bet on Diaz vs. Masvidal, register now and enjoy the best UFC odds. Get a 100% Free Play Bonus by making a minimum deposit of $100.

If that weren’t enough, it would be Dwayne “The Rock” Johnson, who’ll be presenting the new belt to the winner. It seems unusual, but this is a late plan to cover for the missing UFC fight between Kamaru Usman and Colby Covington, a bout that was supposed to be the main event at UFC 244.

When this fight got canceled, White came up with the idea of putting up an exciting fight, not for a title, but an actual money fight with fan-favorite fighters.

The winner of the BMF title is likely to get a shot at fighting Usman for a real title. The next bout for the BMF title may also come versus Conor McGregor, in what can be another money fight to find the ultimate bad boy of mix martial arts.

If you like good MMA fights, the main event has all the ingredients, and it’s likely to get violent! Neither of these two fighters is part of the UFC’s pound-for-pound elite, but this is doubtlessly a fight many fans of the sport want to see and in the words of a famous sports reporter… It’s classic UFC, man!

Diaz, 34, is a UFC fighter famous for his brutal back and forth with McGregor in 2016, and also for defeating Anthony Pettis in August at UFC 241. He became a professional MMA fighter back in 2004 and had 20 victories in a total of 31 fights. Including 5 knockouts and 12 submissions.

Also 34, he is famous for defeating Ben Askren back in July in what has been considered the UFC’s fastest all-time knockout. His professional career started back in 2003, a year earlier than Diaz’s. Right now, he holds a record of 33-13, including 14 knockout victories, and 2 submissions.

While the main event at UFC 244 is all about fire, gasoline, and BMF’s, the co-main event it’s redemptive. Because neither of these fighters has won a fight since early 2018.

So, both of them must put up a good show if they want to remain as part of the MMA 185-pound elite.

Gastelum vs. Till will be an exciting fight, get ready to bet on it by registering now at HRwager.

Fight to Keep an Eye On: Kevin Lee versus Gregor Gillespie Betting Odds

This one it’s a pretty interesting one as it’s a bout between two fighters that are coming to this fight with different recent backgrounds.

On the one hand, we have Lee, who’s coming from two straight losses to Al Iaquinta and Rafael dos Anjos respectively. On the other hand, we have Gillespie, who hasn’t lost a professional MMA fight since he turned pro back in 2014.

As you can see, it’s clear that these November 2nd fights at New York have all the right ingredients to please even the most demanding UFC fans…

And, if you want to make things even more interesting, we invite you to visit our sportsbook and get your UFC betting action in on your favorite fighters!